CF™405M is a blue fluorescent dye spectrally similar to Pacific Blue® dye (Figure 1). CF™405M is as bright as Pacific Blue® dye but is significantly more photostable than the latter (Figures 2 and 4). An additional advantage of CF™405M is that it has less spillover in the 525/50 green channel than Pacific Blue® dye due to narrower emission peak (Figure 1), making CF™405M a superior choice in multi-color detection applications. We also offer CF™405S, another 405 nm-excitable dye with an even shorter emission wavelength.

A full selection of reactive dyes, secondary antibodies, antibody labeling kits, and other bioconjugates including phalloidins, Annexin V and α-bungarotoxin are available for CF™ dyes.

View products associated with this technology… 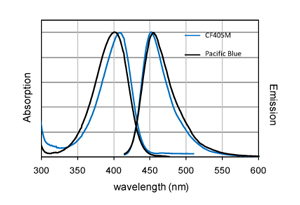 Figure 2. Intracellular staining of Jurkat cells with mouse anti-CD3 or no primary followed by goat anti-mouse antibody conjugated to either Pacific Blue or CF405M. Cell were analyzed on a BD LSRII flow cytometer with 405 nm excitation and 450/50 nm emission filter. Bars represent the relative fluorescence of the geometric means of the cell populations.

Figure 3. Photostability of CF405M and Pacific Blue. Dye solutions were continuously exposed to mercury arc lamp illumination on an epifluorescence microscope with a DAPI filter set. Images were captured every 5 seconds for one minute. Fluorescence intensity was normalized to time 0.